Located on a sleepy slice of lakefront, you’ll find a clubhouse, a dock and the Lake Beulah Sailing School. But appearances can be deceiving — this is no run-of-the-mill yacht club. It’s a place where trophy-winners, titleholders and even an Olympian first learned how to sail.

Currently serving as Commodore, Haeger says, “We’ve had college All-American sailors, two Rolex Yachtswomen of the Year, an Olympian and at least several people go on to become professional sailors.”

The yacht club continues to churn out champion after champion, which could make many wonder: What is it about Lake Beulah that generates world-class sailors?

According to Haeger, there are zigs and zags and challenges that make Lake Beulah an ideal lake for expert sailing. He says that although it’s not the “biggest lake in the world” at only 850 acres, and it’s not “big and round like a lot of good sailing lakes,” there are conditions that cultivate sailing skills.

“The wind is affected by the trees on the shore. You get a lot of changes in the wind, and that actually makes you a good sailor. It teaches you how to adapt to changing winds.”

Founded in 1893, the five people who started Lake Beulah Yacht Club must have seen the potential the lake held for good sailing. By 1899, the club became popular among local residents, and membership rose to 34 families. In 1972, the club purchased the piece of land where the clubhouse now resides.

Sailing classes began in the 50s, and in the early 70s, the decision was made to separate the Lake Beulah Yacht Club from the Sailing School, which now operates as its own 501(c)(3) organization and leases the clubhouse for their lessons.

The sailing school offers a wide variety of lessons to both children as young as 6 and adults. They include: Optimist Dinghy Courses, X Boat “Cub” Courses and Learn To Sail Clinics geared toward adults.

Nearly every student has a single goal in mind — to participate in one of Lake Beulah Yacht Club’s highly competitive races.

THE SPIRIT OF COMPETITION

The yacht club holds a staggering 200 races per season, in addition to four regattas. “The sailing school does the training and teaching. The yacht club sponsors the racing,” explains Haeger.

The programming centers on four fleets: the C Fleet (“The largest boat we sail is called a C Scow. It’s a 20-foot high performance boat made for sailing on lakes,” says Haeger); the MC Fleet (“The MC Scow is a very similar boat, but it’s only 16 feet long and has a crew of one); the X Fleet (“A 16-foot junior trainer with a mainsail and a jib”); and the Opti Fleet (“The Optimist Dinghy is an 8-foot international youth boat”).

Although there’s plenty of socializing, tennis and even some leisurely sailing among the yacht club’s almost 400 members, the highlight of sailing season is racing, with competitions on Saturday mornings and afternoons, Sunday mornings and Wednesday evenings. If there are members not racing, you can typically find them volunteering.

“There are probably 150 people involved in running these races,” says Haeger. “Almost everything that gets done at our club is through volunteers.”

There will be four regattas taking place on Lake Beulah this year, including the sailing school’s OPTI regatta in June, an Inland Lakes Yachting Association Invitational Regatta for the MC class and two memorial regattas later in the season.

When it comes to yacht clubs, Haeger says, “We probably have one of the most intense focuses on racing.”

Out of the hours upon hours of lessons, races and practicing, a fleet of prize-winning sailors has been born.

Haeger explains that when people “started going to events off the lake” around Wisconsin and then “internationally,” that’s when the wins began to rack up.

“We’ve had champions in all the classes that we sail in. We’re very proud of the sailors who have come from the yacht club,” he says.

“There’s probably no other fleet in the country that has 32 C Scows and 35 MCs racing. The competition is tremendous. I attribute our success to the willingness of our adult sailors to encourage and support new sailors and the friendliness of the lake toward sailing.”

Lake Beulah has also seen its share of internationally-acclaimed sailors, including Stephanie Roble who is currently campaigning for the 2020 Olympics and was previously named a Rolex Yachtswoman of the Year. Annie Haeger earned the same honor and competed in the 2016 Olympics in Rio (see sidebar).

Haeger says that when the girls were young and learning how to sail, a group of parents from the yacht club “formed a pact.”

“They got extra coaching and took them to sailing events all over the country and around the world. They all did really well through high school and college.”

And from that group of kids, Haeger says there were “five or six college All-American sailors, a Rolex Yachtswoman of the Year and an Olympian.”

A SENSE OF COMMUNITY

When Al Haeger purchased a home on Lake Beulah in 2001, he found that he was drawn to the yacht club. His grandfather bought a place on the lake in 1940, and Haeger’s two uncles were heavily involved in sailing. Continuing the family legacy, Haeger began sailing at age 53 and eventually moved into racing.

Many other yacht club members are just as enthusiastic about sailing.

“It’s a sport you can do for your whole life. We have guys in their 80s that are racing,” says Haeger.

Lake Beulah Yacht Club has approximately 175 families, alongside single adults and youth, for a total of about 400 individual members. All of the members live on the lake or nearby. This gives the club members a close and constant connection.

At the yacht club, members enjoy participating in races together, playing tennis on the club’s two clay courts, going to parties like the Memorial Day bash to kick off the season, a Commodore’s Ball and casual barbeques. Haeger even knows of four or five couples who grew up on the lake as kids, became yacht club members, got married and now have kids on the lake who are sailing.

To the members of Lake Beulah Yacht Club, sailing is much more than sailing. It’s connecting. It’s challenging. And it’s gratifying.

Haeger says, “Sailing is one of the greatest sports because it’s mental, physical and takes a lot of patience. It’s a character-building sport where you can do everything right and still get a bad break. It offers a lifetime of learning and chances to do it well.” 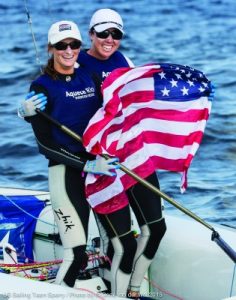 At 27, Annie Haeger has already made a lasting mark on the sailing world. And it all started from her little corner of the world on Lake Beulah, where she spent childhood days sailing and spending time with her family.

“My dad’s side of the family has been on Lake Beulah for four generations. On weekends in the summer, three generations of Haegers can still be seen racing, including my 81-year-old grandfather. I guess you can say it’s a family affair,” she says.

Annie took her first sailing class when she was 8. Although she says that the class was “not focused on developing Olympians, but rather creating an atmosphere to develop lifelong friendships and a love for the sport,” she was destined for the Olympics, where she competed in 2016.

She says, “Walking through the stadium at the opening ceremony, I have never felt so much pride for my country and the place I grew up. Chanting ‘USA! USA!’ in the tunnel next to Michael Phelps and Serena Williams is an image I will cherish forever.”

Even though she has entered the big pond of professional sailing, Annie says, “My heart will always be with Lake Beulah.” She tries to make it back to the yacht club as much as she can during the summer to sail on a lake that she says teaches one of the sport’s most important lessons: patience.

“Since the lake is so small and the breezes are unpredictable, you must be comfortable with rolling with the punches that Mother Nature will throw at you.”

Annie says that the yacht club is much more than a place where you learn to sail. During her Olympic campaign, she says that “people were coming out of the woodwork” to volunteer, share inspiring messages and plan fundraisers.

“The members of the Lake Beulah Yacht Club were with me to celebrate during the highs and were there to lend a hand during the lowest of lows. The support my teammate Briana Provancha and I felt from that tiny club in the middle of Wisconsin is something that I don’t take for granted. I continue to feel like the luckiest girl in the world due to the members of the yacht club and the support and love they gave over the last four years.”

This website uses cookies to improve your experience while you navigate through the website. Out of these, the cookies that are categorized as necessary are stored on your browser as they are essential for the working of basic functionalities of the website. We also use third-party cookies that help us analyze and understand how you use this website. These cookies will be stored in your browser only with your consent. You also have the option to opt-out of these cookies. But opting out of some of these cookies may affect your browsing experience.
Necessary Always Enabled
Necessary cookies are absolutely essential for the website to function properly. These cookies ensure basic functionalities and security features of the website, anonymously.
Functional
Functional cookies help to perform certain functionalities like sharing the content of the website on social media platforms, collect feedbacks, and other third-party features.
Performance
Performance cookies are used to understand and analyze the key performance indexes of the website which helps in delivering a better user experience for the visitors.
Analytics
Analytical cookies are used to understand how visitors interact with the website. These cookies help provide information on metrics the number of visitors, bounce rate, traffic source, etc.
Advertisement
Advertisement cookies are used to provide visitors with relevant ads and marketing campaigns. These cookies track visitors across websites and collect information to provide customized ads.
Others
Other uncategorized cookies are those that are being analyzed and have not been classified into a category as yet.
SAVE & ACCEPT