One of Diblik’s high-profile projects is located at the Wisconsin Executive Residence in Madison. He worked with First Lady Tonette Walker to design several gardens on the property, including those with prairie-inspired plantings. The annual garden in the front of the residence, shown here, has plantings that change each year, but consistently have a red, white and blue theme.

Roy Diblik rolls up in his gray pickup truck. It has a little rust around the edges and 415,000 miles on the odometer.  It’s a truck that needs a name, but Diblik just calls it “my truck.”

“It’s only broken down three times,” he says, flashing an impish grin that shows a boy beneath the surface. It’s the only hint of pride seen all day from this humble man.

Diblik, 63, looks the part of a humble plantsman. His face is weathered from a life lived outdoors. His close-cropped beard surrounds his face and an ever-present baseball cap tops it off.

You’d never guess that he’s known worldwide as a perennial plant expert with an impressive landscape design portfolio, including high-profile projects in Chicago. There he planted 26,000 plants at Millennium Park and developed the gardens at the Shedd Aquarium and at the Art Institute of Chicago. Here in Wisconsin, he developed the gardens at the governor’s mansion in Madison and at Grand Geneva Resort & Spa in Lake Geneva. He’s also a nationally-known speaker and author of several books on perennial gardens.

And he’s planted some twelve million plants in his lifetime.

We met at a coffee shop in Fontana, not far from his home base at Northwind Perennial Farm, a hidden treasure just north of Lake Geneva that he owns with his partners Colleen Garrigan and Steve Coster.

But it turns out Roy Diblik isn’t out of place. He’s an old-soul who appears comfortable anywhere. He points to Fontana as one of the places where the city fathers got it right and have nurtured a wonderful prairie.

“The best thing that ever happened to me is that I didn’t get a degree in horticulture,” he says over a cup of tea. “The instructor would have put me in a box and I would have lived in that box my whole life.”  “Everything I learned I learned from plants. They’re living beings,” he says. “They breathe, they reproduce, they’re intimate with each other. They’re like us, but most people don’t see that.”

It’s an understatement to say Diblik likes talking about plants — and gives them human qualities.

“They share their own language, one that we have ignored or misread,” he writes in his book, The Know Maintenance Perennial Garden. “When it comes to deciding what constitutes the good life, our own needs and self-importance have prompted us to drown out and speak for other living beings.”

A SLIVER OF A GARDEN

Roy Diblik grew up in Berwyn, Illinois, near Chicago. He credits his work ethic to his Bohemian background. He has an early memory of planting kohlrabi seedlings with his grandmother in a “sliver of a garden” alongside the garage.

He recalled the experience in The Know Maintenance Perennial Garden. “Each day after hanging some laundry and talking with the neighbor over our privet hedge, she would find her way to that small patch of plants and joyfully tend to them.”

But Diblik wasn’t born with a love of plants. Sports was his first passion and sometimes gardens got in the way. “I hated gardens because every time I played baseball, the ball would roll into a garden and I’d get yelled at,” he recalls.

Even as a child, Diblik loved being outdoors. He recalls visiting his father who worked at a print shop. “He walked into the printing press and I started crying,” he says. “I thought it had eaten him.”

But he didn’t really experience the fullness of nature until he got away from the shadows of Chicago and vacationed with his parents at a cabin up north where he could hear the loons sing and see the stars.

While those experiences called for a non-traditional career in the outdoors, his father had other ideas. “He wanted me to have a career that gave me health insurance and a retirement plan. My mother told me to do what I loved.”

Diblik started teaching outdoor education and helped tend the ballparks for a school district. The job had fringe benefits and a retirement plan — just what his father wanted for him. “But my mother always said, do what you love.”

He traded tending to ballfields and teaching kids for a job at the Natural Garden Nursery in St. Charles, Illinois. That job didn’t have fringe benefits and only paid half as much as his previous position. “My dad flipped,” he says. “My mother said … do what you love.”

Diblik had a lot to learn. “I got to the Natural Garden without knowing what one was,” he says.

He learned from an 82-year-old man who was the originator of the natural garden. “Mr. Stevens sat on a stool and taught me everything,” Diblik says. “He was like Gandhi.” After that experience, he says he never thought of doing anything else.

It was at St. Charles that he met Steve and Colleen, who loved gardening as much as he did, and they came up with the idea of starting their own place. In 1991, they bought an early 1900s, 10-acre farm and created Northwind Perennial Farm.

They all have their separate skills. Colleen is the wholesale manager, seasonally filling the age-old barn with garden art and gifts nestled among vases filled with flowers picked just that day. It’s Colleen who brings life to the farm with chickens, roosters and donkeys along with a myriad of cats who greet the visitors to Northwind. “She sees beauty in things that others don’t,” according to Diblik.

Steve runs the landscape design and installation division. He builds the beautiful stone walls and the winding paths at Northwind.

Coincidently, Northwind found its way into the name of ornamental grass Roy Diblik developed — Panicum Virgatum Northwind, a gorgeous, tall, and strong-standing plant that has withstood the winds of a hurricane.

“What are people engaged in today?” Diblik muses. “We have a culture enchanted with money, and not knowing how much is enough. They’re not enchanted with magical things like a seed you can hold in your hand.”

He decries the trend toward what he calls “fashion plants,” the brightly colored plants you see at places like Disney World. He

finds beauty in the subtler things and feels the joy of gardening is in the gardening itself.

He doesn’t like that the terminology has changed from “gardening” to “yard work.” It takes the romance out of the task, he says. As a result, people hire contractors like him to do the work they could be doing for the fun of it.

“The industry isn’t promoting gardens,” he adds. “They’re promoting products. If you truly love flowers, the only way to show them you love them back is to love gardening. The joy is in the doing.”

Diblik actually savors gardening’s slow pace. He finds a certain elegance in the extended effort, calling it the “beauty of time and patience to get it right.”

To make gardens easier to grow, he has developed a system for planting perennial gardens using grids, some inspired by the impressionist painters like Cezanne and Monet. These grids combine complementary plants that thrive together and grow as a community — all designed to make maintenance easy and the plant communities easier to understand.

Just as writer Ernest Hemingway said he learned to write from impressionist painters, Diblik looked at those same paintings and saw a new way to look at gardening.

In spite of all his knowledge, Diblik doesn’t consider himself an expert. “If someone tells me they’re an expert, it shows you they haven’t learned anything,” he says, “because ‘experts’ don’t ask questions. The minute you stop asking questions you’re dead.”

Roy Diblik is always asking questions of nature and therein lies the joy. “The garden,” he says, “keeps me grounded.”

How do you get people to enjoy the act of gardening? “Start with the kids,” he says.

When he was an outdoor ed teacher he worked with city kids from Chicago who had never seen such open spaces.

“We went to camp for ten days and they questioned everything. Stunning questions. They ran through creeks, they didn’t know what branches were, they’d never seen mature trees. It was probably the most fantastic part of my life.”

PLAN A VISIT TO NORTHWIND

Northwind Perennial Farm is located on Hospital Road, just off Highway 120 north of Lake Geneva. If you haven’t visited, you just might want to put it on your to-do list. You’ll experience the barns, the animals, the winding paths, the pretty trees that shade the walks, the ponds, the flowers and plants for purchase. And perhaps a chance to spot Roy Diblik, busy at work, but always willing to stop what he’s doing and talk about his passions – the land, the air, growing things and the magic of gardening. 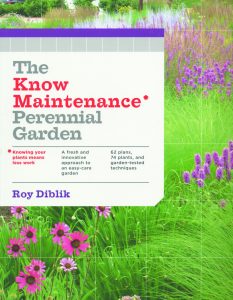 0 replies on “The Joy is in the Doing”
View Calendar

This website uses cookies to improve your experience while you navigate through the website. Out of these, the cookies that are categorized as necessary are stored on your browser as they are essential for the working of basic functionalities of the website. We also use third-party cookies that help us analyze and understand how you use this website. These cookies will be stored in your browser only with your consent. You also have the option to opt-out of these cookies. But opting out of some of these cookies may affect your browsing experience.
Necessary Always Enabled
Necessary cookies are absolutely essential for the website to function properly. These cookies ensure basic functionalities and security features of the website, anonymously.
Functional
Functional cookies help to perform certain functionalities like sharing the content of the website on social media platforms, collect feedbacks, and other third-party features.
Performance
Performance cookies are used to understand and analyze the key performance indexes of the website which helps in delivering a better user experience for the visitors.
Analytics
Analytical cookies are used to understand how visitors interact with the website. These cookies help provide information on metrics the number of visitors, bounce rate, traffic source, etc.
Advertisement
Advertisement cookies are used to provide visitors with relevant ads and marketing campaigns. These cookies track visitors across websites and collect information to provide customized ads.
Others
Other uncategorized cookies are those that are being analyzed and have not been classified into a category as yet.
SAVE & ACCEPT
[class^="wpforms-"]
[class^="wpforms-"]